Well the mould is finished. It’s not the best mould I have ever made (I forgot to wash off the soft soap so it’s a bit flakey) but it is intact.

I have just been playing about with what I can do with the mould, I started off by breaking the first piece and sticking it very crudely back together. At first I thought I would fire some of the pieces separately and apply decals thus creating my own fragments. I had left quite a few gaps so I then thought it would be interesting to re-pour the mould with a contrasting coloured slip which would (hopefully) just fill in the gaps. As you can see from the photos the results weren’t great, mainly because the first layer was too dry and fell out with the weight of the second layer. It does however have potential, I have used up all my slip on the first experiment so I am now in the process of learning how to make my own casting slip. I also thought that using paper clay would enable me to push he piece further, making it more able to withstand all the processes involved. I am also planning on re-visiting the idea of making my own fragments. 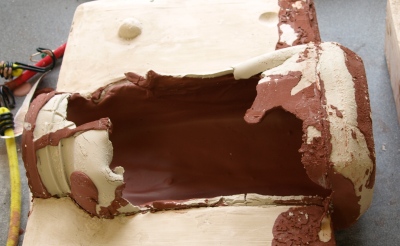